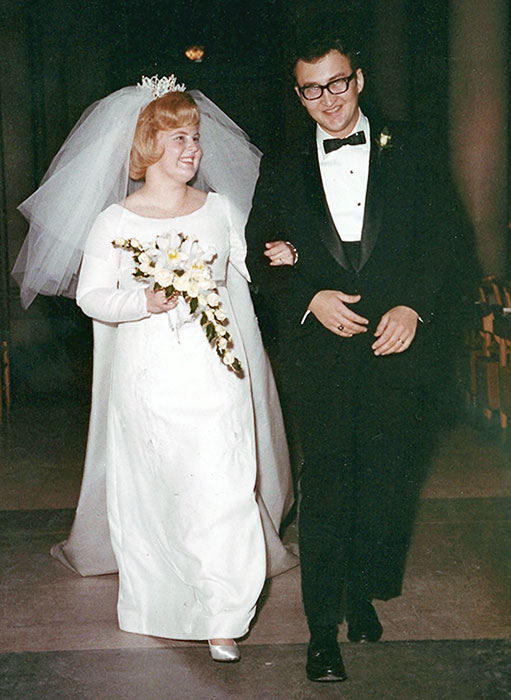 It was 49 years ago this Monday (Memorial Day) that my brother-in-law, Peter Borsay, was killed in Vietnam. Peter was married to my husband’s older sister Peggy.

Unfortunately, I never met Peter. Steve and I met when we were seniors in high school three years after Peter died so it’s a bit strange for me to “remember” Peter since I never knew him. But I wish I had known him.

I have always had a feeling that there was something incomplete in my history with Steve’s family since I never met Peter.

You see, Peter’s death was even more tragic (if there is such a thing) because he was killed by “friendly fire” during a ceasefire: military speak for our side killed him by accident. We heard that a helicopter still had its load of weapons and was told to discharge the load before returning to base by dumping it into an empty field. However, the field wasn’t empty.

Five men were injured, and Peter was killed — instantly, from what we were told. It was a horribly tragic communications glitch.

Peter was in his prime when he was killed; he was in graduate school with a budding academic career ahead of him. Peter and Peggy had only been married 17 months when she got the news that Peter was gone. She became a widow at 22 years old. She never remarried or had children.

Peggy went on to get her doctorate and worked in the corporate world for many years until she passed away in 2006 after losing a valiant fight with breast cancer.

But I think a part of her heart died that Memorial Day with Peter and there was always a sense that she never recovered from her broken heart. On a cold December day, we buried Peg’s remains next to Peter’s, so many years later, in this cemetery in West Virginia surrounded by Peter’s family.

I remember the first time I went to the Vietnam Veterans Memorial in Washington and looked up Peter. There is a large book with all the soldier’s names and I looked up Peter Borsay. He is on Panel 23W Line 025, pretty much smack in the middle of the Memorial.

The names are engraved in the granite and I remember touching the stone and running my hand over the indentation. There was something almost comforting, if that makes sense, about touching the name of this man who loved my sister-in-law, a woman I loved like a sister.

Peter and Peg are both gone now. We don’t always understand or agree with “policy” but what I do know is this: Real people give real lives for our freedom.

My life has been touched by a soldier I never knew, and the world is a different place because of his sacrifice.

For that, this Memorial Day, I am grateful.

Now that you’ve just heard a little about Peter, let me tell you about Peg because, although I didn’t know Peter at all, I was privileged to know Peggy quite well.

Peg was a rare gem.

And yet… there was something about her heart that always seemed closed off to those who knew her well.

In fact, she warned me when she got her diagnosis of breast cancer that she could handle things on her own, she would let me know when she needed me, and I was to come on her terms. And, of course, I told her I would do whatever she needed! (She could be formidable when she made up her mind!)

But over time, during her arduous battle, we became closer than either of us ever expected.

We laughed and cried and laughed some more, ending up battling cancer together in the most intimate ways. During those difficult days and months, it felt like her heart opened up, even if I can’t explain how or why.

Peg died in my arms in as holy a moment as I can ever imagine as she ran beautiful and whole into the arms of Jesus.

Then, as we began the awful process of going through Peggy’s things, I was surprised to find a box hidden away in the back of a closet simply marked “Peter.”

As I unpacked it, little by little, I felt like I was unpacking her heart. I found all the love letters Peter had written to Peggy from boot camp to Vietnam.

I also found the flag from his casket, his medals of valor, and his wedding ring.

Inside his ring was inscribed verses from the book of Ruth. Verse 1:16 is well known: “Do not urge me to leave you or to turn back from you. Where you go I will go, and where you stay I will stay. Your people will be my people and your God my God.” (Which seemed appropriate given Peter’s Hungarian heritage!)

But I was surprised it also included verse 17. “Where you die I will die, and there I will be buried. May the LORD deal with me, be it ever so severely, if even death separates you and me.”

For whatever reason known only to them, this was the verse Peter had in his ring when he was killed so very far away from Peggy. But I imagine that ring was a link that helped to hold her in his heart.

And so it seems fitting that Peter and Peggy were laid to rest together here in his little family cemetery in Morgantown where they met and fell in love.

This Memorial Day, I am glad to remember them both.

Their lives had meaning and impact, and they will never be forgotten.

And as we remember all those who have made the ultimate sacrifice, may we be grateful and take time to acknowledge their hopes and dreams that now are lived out in our freedom.